Selling out in public

The Quiet Fan is my third book, but the first where I've had the chance to sell copies directly to the public. It's a bit like hosting a party, where the only questions that plague your mind are, "What if no one comes?" and, "What if people do come and then have a shit time?" Except when selling a book in a public place you worry, "What if no one buys it?" And then, "What if people buy it, but then hate it?"

At least when you sell someone a book they are unlikely to stand there reading it while drinking heavily and then, within a few paragraphs, announce, "This is shit! I want my money back." At the moment where they hand you their cash you are so grateful that all you can think is, "Please, please let this be something they like." I have to counter an instinctive temptation to hand it over for free, while apologising in case it might not be their thing.

Last Saturday, while manning my book stand in the Fan Zone at Lincoln City FC prior to their home defeat to Crawley Town, I also handed out freebies. I had a few leftover sets of crowd-funding postcards depicting scenes from the book by illustrator @Urban_Country (WSC illustrator and New European cartoonist Tim Bradford); a few old Lincoln City replica shirts; and the original match programmes from some of the games that are referenced in the book. No one expected giveaways, and almost all opted immediately to take the postcards, because they look pretty cool. And who doesn't love getting Stuff for Nothing, like stickers, key rings, pens, t-shirts and fridge magnets? [Begins to imagine 'Quiet Fan' merchandising empire.]

One fan, though, was immediately attracted to my old Lincoln home shirt from the 1995-96 season. "How much is that?" he wanted to know. "It's free if you buy the

How I tried, and failed, to boycott the World Cup

Having watched almost every kick of the previous 11 World Cups, my family and friends were sceptical about my ability to boycott the 2018 competition (see polemics passim). Having ignored the qualifiers over the preceding two years, though, I was more optimistic. Wrapped only in abstract but righteous armour, I sat out the first round of group games at Russia 2018 with barely a glance at the screen. Soon after that, I left Germany for a French hamlet in Burgundy where - thanks to the generosity of friends - I stayed alone in a farm house with thick stone walls, uneven floors, and neither a TV nor an internet connection.

The night before I left, though, my wife and youngest daughter were watching Croatia v Argentina while I packed, and their yelps and yells were impossible to ignore. I thought back to when I was watching Senegal v France, the opening game of the 2002 World Cup. I had loudly exclaimed throughout that astonishing match, but at one point found the whole family - wife and two daughters, then aged 6 and 3 - standing next to me and asking, "Jesus, is this what it's going to be like for the next four weeks?"

We've come a long way. They shout, emote and cuss now too, and they claim to have learnt it from the best. Now here I was, 16 years later, wishing that they would keep the noise down. I was wishing even more that I could sit beside them on the

How did I imagine Chinese football fans? The truth is that I expected them to be passive. I have no idea why. I'd never been to China in my life, let alone a Chinese football match. Maybe because it's a nascent league perceived as being desperate to establish itself after starting 100 years too late. Possibly, I thought (though not with much depth), the fans wouldn't really know how to support their team. You know, because they don't have a century of tradition behind them, and all that bollocks.

European football's default position on any league beyond its ken is that it must be second-rate. Our perception of the Chinese Super League has largely been as follows: its owners are just chucking huge money after aging stars, in the manner of Major League Soccer since the Beckham Rule, and the North American Soccer League of the 1970s. Japan and Australia have been down that route too. We condescendingly wave a knowing goodbye to star players who fly East to bow out for one last pay-off in a sub-standard league.

Lazy narratives are borne of a lack of curiosity. Both apathy and a lack of interest almost caused me to stay away from Shanghai Shenhua against Hebei at the tail-end of March. Yet if I'm in a new 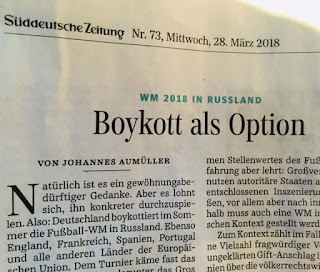 The attempted assassination by assailants unknown on the Skripal family in Salisbury, England, has prompted the kind of decisive political action that the Russian annexation of the Crimea, the country's mass-murderous involvement in bombing Syrian rebels, the suppression of domestic dissent and gay rights, and its state-sanctioned blanket cheating at the Sochi 2014 Winter Olympics was unable to provoke. Yes, some countries will be boycotting the 2018 World Cup.

Not an actual boycott, though - just a symbolic one. Rather than withdrawing their teams, countries are apologetically deciding to keep their official delegations at home. So, politicians on a free jaunt to watch some football are sacrificing themselves. The retreating refugees of eastern Ghouta will surely be impressed. And just imagine the hurt of the Russians when they see that the Icelandic

The Quiet Fan - another explanation

As The Quiet Fan's publication date approaches with all the speed and reliability of a Sinclair C5, I'm once again having to face up to the question, "Soooo, what's the book about?" Ask any author this question and you're splitting them internally in two. One half of them is in panic, thinking, "I do not want to answer that question because I don't even really know how." And the other half is also in panic, thinking, "I have to answer this question. Because this is something I suppose that I really ought to know, having actually written it."

It's complicated, of course. No writer wants to look so superficial that they can sum up their book in one pithy sentence that will lure in a potential reader. That's the domain, we elevated scribes suppose, of trash literature and its easily satisfied readership. "A duke falls in love with a milk-maid while on his way to rescue the last existing copy of the Magna Carta from the power-mad, totalitarian Monocrats

Why I Wrote The Quiet Fan As a book title, The Quiet Fan is meant to be more than slightly tongue in cheek. Sometimes I'm quiet wh...

This blog consists of entirely original content to back my latest book, 'The Quiet Fan' (published by Unbound), which you can order by clicking the image above. Thank you very much.

Other Blogs in this network

Ian Plenderleith
Author of 'For Whom The Ball Rolls', 'Rock n Roll Soccer: The Short Life and Fast Times of the North American Soccer League', and 'The Quiet Fan.' I coach, play, watch, referee and write about football, and sometimes have a proper life as well.